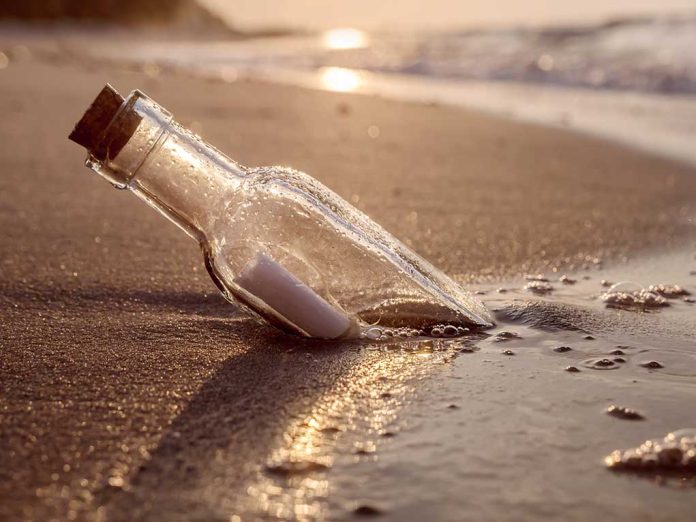 (NewsBroadcast.com) – It sounds like the plot of a romance movie, or a popular song title from the Police, but a real-life message in a bottle has managed to cross the Atlantic Ocean. The story is bringing hope to those who dream of sending a message or picture to a far-off country using an ancient means of communication. Imagine walking on the beach and discovering this treasure. It’s exactly what happened to a British man, recently.

Richard Lord was on a cleaning mission, picking up trash on Chouet Beach following a storm when something caught his eye. He could see money through the bottle, prompting him to open it up and see what else awaited. Inside, there was a note on Crowne Plaza Hotels & Resorts letterhead with the date, January 4, 2020, and a Florida location.

Also inside was a business card, which identified the sender as US Navy Captain Dave Mozgala.

People have tried to send messages in a bottle for centuries, it’s quite literally a tale as old as time. While not all messages make their way to someone, many do and the stories behind them are quite fascinating.

For example, earlier this year, 17-year-old Christian Santos of Portugal was fishing in the Azores, when he discovered a crumpled-up bottle. Upon opening it, he discovered it was tossed into the ocean in 2018, three years earlier, from Rhode Island. His mother posted on Facebook trying to find the owner and he even emailed the included address, but neither were successful in their efforts. It still makes for a cool story, though.

The longest a bottle has traveled was reported by Science Focus. It contained a Dr. Who postcard sent from Tyne and Wear in the United Kingdom back in 2011. Just 17 months later, it showed up over 9,000 miles away in Perth, Australia.

However, there’s one that beats that — only it’s not a single journey, but rather a game of catch and release. Back in 1929, marine scientists in Germany decided to play tag with a bottle, asking those who discovered it to record where it washed up before dropping it back in the ocean. Over a 6-year period, this bottle traveled nearly 16,000 miles. Talk about a heckuva journey.

There are so many more tales, you could fall down a rabbit hole of messages in a bottle that made their way around the globe. Who knows, maybe the next time you spot a bottle in the water, you might have your very own experience.