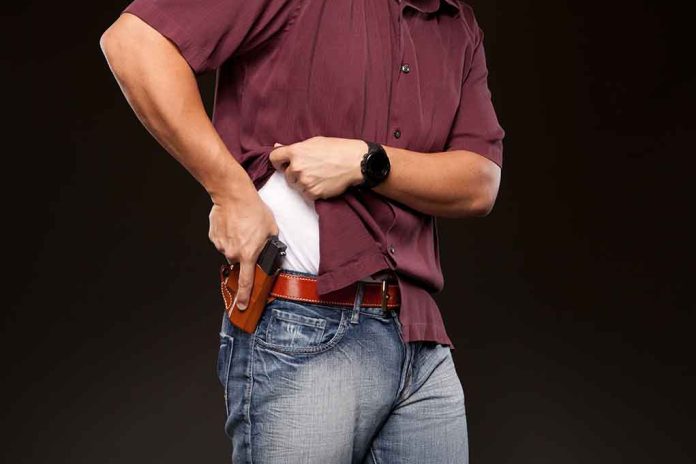 Supreme Court Stuns The Country With This New 2A Ruling

(NewsBroadcast.com) – The Second Amendment (2A) of the United States Constitution protects an individual’s right to keep and bear arms in this country. That being said, not even the most ardent supporter can look at what happened at the Robb Elementary School in Uvalde, Texas, without feeling a sense of horror at the act and compassion for the victims. Nonetheless, America is still a country built on laws, and it is the duty of the Supreme Court of the United States (SCOTUS) to make sure they are followed. The Court’s latest ruling addresses a New York law but has repercussions for the entire nation.

New York had required that a person seeking an unrestricted license to carry a gun outside the home had to provide a valid reason — what it called “proper-cause” — before it would be granted. Robert Nash and Brandon Koch both had their applications turned down, and so they turned to the courts claiming this violated their 2A rights.

The law limited approved permits to people who were involved in hunting and shooting sports or those who may have a “special need” like people who carry moneybags from a place of business to the bank. Relying on recent precedent, the SCOTUS, in a 6-3 decision, ruled that the restrictions, even though they had been in place since 1911, were too restrictive.

The majority opinion relied heavily upon the precedent set in the 2008 case of the District of Columbia v. Heller, in which the court ruled that the original plaintiff could not be forced to use the weapon for self-defense only in his own home. That decision also effectively removed the “well-regulated militia” clause from any kind of consideration in the ongoing debate.

Justice Thomas wrote that the 2A is not “a second class right” that needs another kind of government approval any more than the right to a free press or expression requires. The plaintiffs also claimed their 14th Amendment rights were also violated, to which the court agreed, writing that the state’s “proper-cause requirement” prevents people with “ordinary self-defense needs” from exercising their right to keep and bear arms.

President Joe Biden released a statement shortly after the decision became public, where he said that in his opinion, “this ruling contradicts both common sense and the Constitution, and should deeply trouble us all.” He also referenced recent mass shootings as part of the reason why he felt the founding document should be ignored.

Other elected officials, such as New York Governor Kathy Hochul (D), have condemned the ruling, which she called “outrageous” and reckless. The Democratic Mayor of New York City, Eric Adams, said that this increases the danger for residents of his city and that they will be working “to mitigate the risks” he believes the ruling creates.

The National Rifle Association celebrated the decision calling it a “watershed win.”